I thought I was done with this Windows computer

I was working on an old Asus Windows desktop computer for a business client of mine this week. They have a business they are ramping up again and needed a computer with an older Microsoft Windows version on it. I tested the computer in Windows and it seemed great. I stripped out all the unneeded programs from Control Panel and thought it was ready for my client. Then it started to act strange. Sometimes it would freeze while I was using it. Sometimes when I powered it on, nothing would show on the monitor and it did that many times. Other times it wouldn’t shut down when the Start icon was used.  I had to shut it down several times with the front panel power button.  I started looking at the hardware as the culprit since I had streamlined Windows. I first suspected the power supply and swapped it out with one in my inventory. This didn’t help and I next suspected the RAM so I removed one stick at a time and then installed them back and no help.  During one of the boot-ups I noticed a strange message on the screen before Windows began. It said the CPU over-clocking was causing a problem and to go into BIOS setup and fix it. The CPU stands for Central Processing Unit and is the brain of the computer  I had never changed anything in the BIOS so this was news to me.  The computer was booted into the BIOS setup screen and I started looking around for anything to do with over-clocking the CPU.  There was a section regarding the CPU, but I didn’t recognize which setting needed to be altered.  To solve the problem I went to the last page of the BIOS setup and selected “Set to Default”.  This action takes all the BIOS settings back to the factory settings which should always work.   Now the computer is much better, and it behaves as it should and Windows does as well. 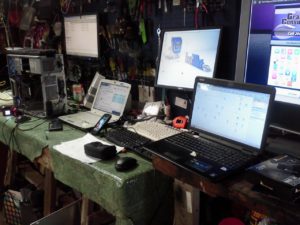