Sometimes you can be a pain Comodo Internet Security, but you are worth it. 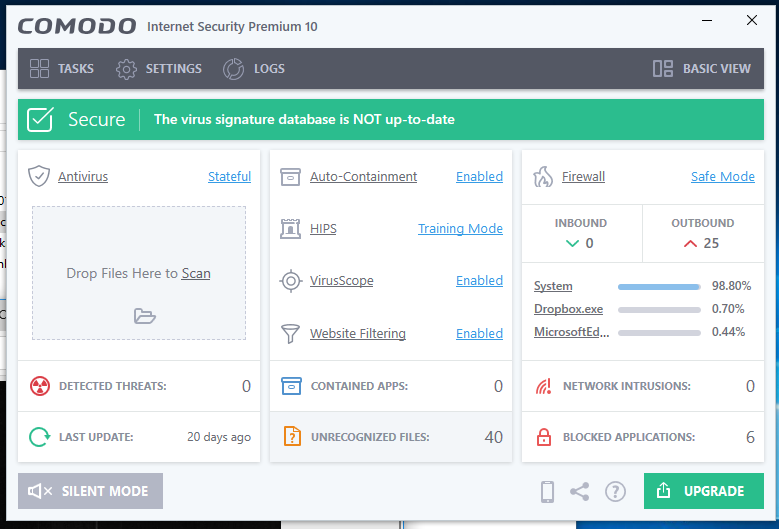 One of my office computers is a Microsoft Windows 10 desktop which has a touchscreen option.  Since Microsoft windows is vulnerable to malicious software, I have Comodo Internet Security installed and this is my security software of choice.  Comodo probably isn’t as well known by the public as some of it’s competitors who advertise heavily. I don’t know when I discovered it – maybe eight or nine years ago. I probably read about it in a computer newsletter and have been using it on my computers and smartphones ever since. I also use it on my Clients’ computers when they don’t have security software or dislike their current one.

Comodo has different modules to keep you safe like Antivirus, a Firewall, Auto-Containment, HIPS(Host Intrusion Protection System), VirusScope, and Website filtering. You can pick and choose which ones you want active which is nice.  If I wanted to use a different firewall than Comodo, I could by disabling Comodo’s firewall and installing someone else’s. There are numerous settings and adjustments you can make with it, but the default configuration usually is fine.  When you first install Comodo, it does its best to discern which programs on your computer are safe and which aren’t.  If you have a specialized program, it can be a pain and take some to get it to work with Comodo IS.  You have to open up the different modules and allow your trusted program or unblock it.

It also has a bonus feature which I forget about frequently: the Virtual Desktop. This gem allows the user to browse the internet or run a Windows program in an environment which can’t harm or infect your real Windows computer.

With all it’s modules, Comodo IS does a great job protecting your computer. If one of them misses the threat, one of the others will probably pick it up. You just have to respond to the messages.  If you don’t, Comodo may isolate one of your programs if it sees it as a threat.

What security software do you use on your Windows computers? Give Comodo a try and see how it goes.