Fort Wayne Computer Repair. Do you like green or orange? 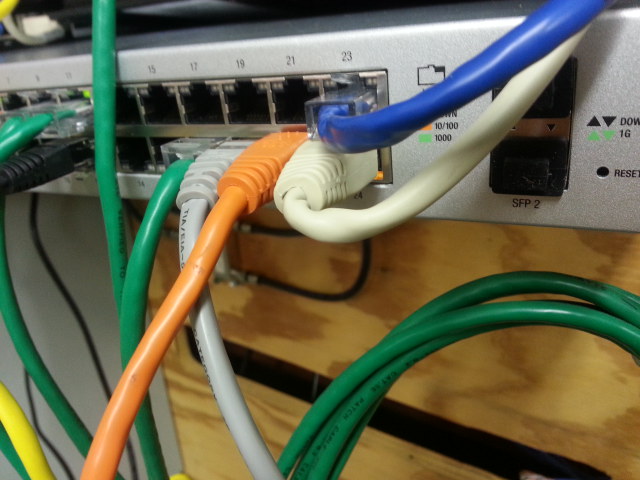 I get to work on all kinds of projects for people. One of them recently was a change from my typical service calls like fighting computer malware, troubleshooting a slow Windows laptop or helping with an email problem.
One of my business clients in Fort Wayne wanted their network infrastructure improved to handle faster internet speeds from their ISP. They ordered the 1GB ethernet switch, 1GB router plus a wireless access point with guest access. They asked me to replace their 100MB equipment with these new items and I was happy to  help.  I programmed the router to match the network address of the previous one and the wireless access point was also configured. I used their existing ethernet cables when I connected all the equipment together.

The new ethernet switch has indicator LEDs which show network activity and link speeds with two different colors. The switch is like a hub which connects all the ethernet devices on the network together. Orange means a link speed of 100 Mbps while green indicates a faster speed of 1Gbps.  I noticed that one of the LEDs was orange which meant a slower speed device was connected like an older computer with a slower network card. I traced the ethernet cable from the switch and discovered it was connected to the new 1GB router. The LED should be green and not orange so something was wrong.  I examined the ethernet cable and it looked old and it was labeled CAT 5 which means Category 5 which is rated for 100Mbps and not the 1 Gbps the equipment is rated for. One end looked pretty bent and possibly the internal copper wires could be damaged.  I found a newer, CAT-5e cable rated for 1 Gbps and swapped it out. Now the link LED glows a pretty green instead of orange.  I had my client test the local network and it was much faster when accessing the file server.  The internet was also much faster. They were very pleased with the speed and like me they like green better than orange.