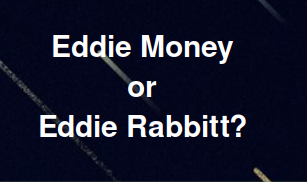 I’ve been having fun on Facebook with a daily music choice question. A choice between two musical artists is posed for my followers where they can make a choice and leave comments. It hasn’t been hard coming up with matchups and many musical groups and soloists have stacked up on paper. Some of the artists are recorded in a computer file which I copied from my smartphone.
Today I tried to open the file to see if I had a particular matchup of Eddie Money and Eddie Rabbit.
The file was stored on my Linux computer on the desktop. When it was double-clicked it gave me an “invalid argument” message and did not display the file contents! Earlier I noticed the last character of the file name was a question mark. In school I learned that special wild card characters weren’t supposed to be in file or directory names. I figured Linux wouldn’t let me save it if it was wrong but it let me.

My gut told me to rename the file without a question mark which Linux let me do. Now when I tried to open it, I was prompted for the program to use and I assumed it was a PDF file. This choice didn’t work as the PDF reader refused to open it. What program did I use to create the file? After some thought I realized Open office or Libre office is my choice usually. Using OpenOffice did the trick and I could now see the 100 or so matchups in the file.