Last month one of my business clients contacted me about a Windows 7 Desktop computer that is used to check in their clients and accept payments in their lobby. “Our computer just shut down.” They texted me a picture of the Windows screen after it abruptly shut down one morning.  The message stated the computer wouldn’t come out of hibernation and there was a problem with the c:\hibernation file.  Oddly, the computer isn’t supposed to hibernate or go to sleep because it is heavily used and needs to be in a constant ready state.  They couldn’t click anywhere on the screen to get it back to Windows 7.

Over the phone I had them force the computer to shut down by holding the front panel power button in until it shut down. Then the computer was started and it came up to the Windows 7 desktop. We discussed the problem and I had my client check the Control Panel – Power settings.  We found the computer was set to hibernate after a certain amount of time. I don’t recall how much time it was set for but you can set for 1 minute up to hours for the monitor and /or computer.  It shouldn’t have been.  They set it back to not go to sleep at all. It’s been a week or so and I haven’t heard anything back from them so I think it must be ok.

I had another thought on what might have occurred. The computer case is on the floor and the employee who was sitting in front of the computer may have accidentally hit the power button momentarily.  Sometimes, computers are set to hibernate when the power button is briefly touched. 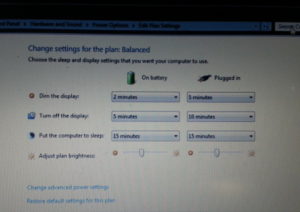