Is it the battery? Fort Wayne computer repair. 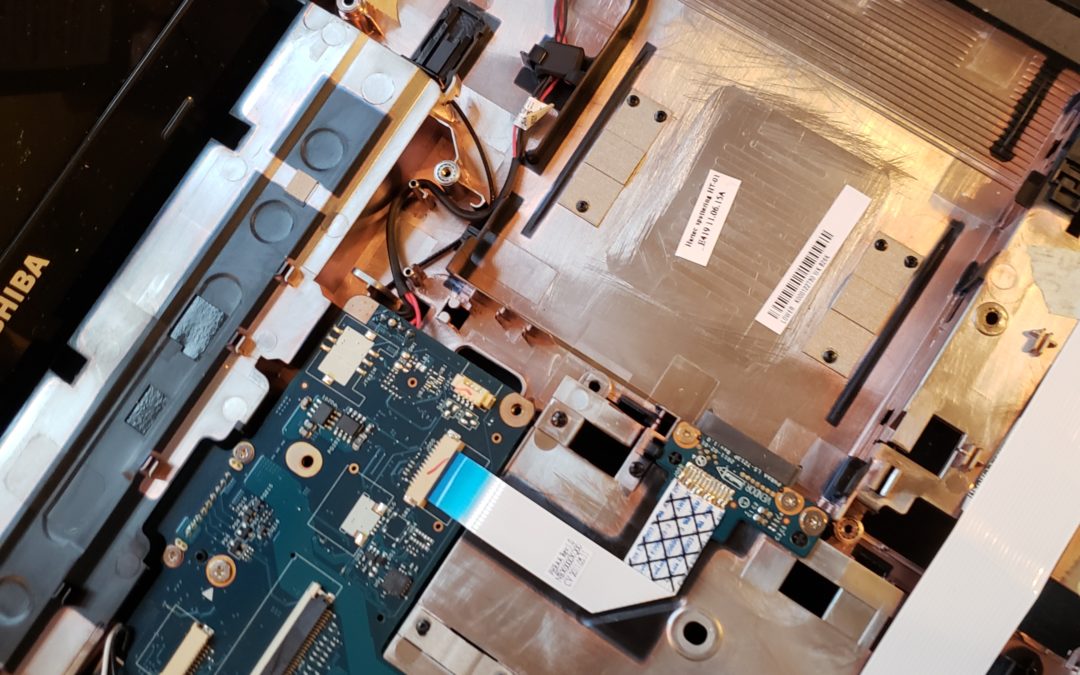 One weeknight around 8PM an email was received from a business client.  A seven year-old Toshiba satellite laptop wouldn’t power-on for my client. They thought the battery was the problem and rather diagnose through email, I said I’d come out the next day and investigate.

Upon arrival at the business, I began asking questions and discovered the day before the laptop worked fine. My client shut it down like every other day. Yesterday, it wouldn’t power on at all. My hope was the AC power supply had an issue or the power strip. The first thing I did was eliminating the AC power strip it was plugged in to. It wasn’t the problem and the battery was removed along with the USB mouse. The laptop still wouldn’t fire up with any sounds or signs of life on the screen.  The ethernet cable was disconnected to see if they had an effect which it didn’t. I didn’t think it would.  An identical laptop was in another room and I took the problem laptop in there. I tried the known, good AC adapter on the problem laptop and unfortunately, nothing.  The power LED illuminates and battery LED does as well, but still no sounds and the HDD LED never illuminates. No video display signal, either.  I tried the laptop with just the battery and no response on the screen.

Different key presses on the power button were attempted next with no help.  The CPU fan came on but no video display. I tried many times to discharge with power switch without the battery installed. Removed back access panel and removed 2 RAM sticks. Still no video. Removed HDD and no help. Disconnected DVD drive and no change.

The laptop was transported back to my office to see if I can get any video signal from the VGA port on my external monitor and it was dead just like the laptop screen. My last resort was to remove the laptop bottom cover to see if anything unusual could be found. After the cover was off, I disconnected and reconnected every ribbon cable I could locate like the video, Keyboard, trackpad, etc. I even disconnected the CPU fan and nothing.  I was going to disconnect the CPU, but i wasn’t sure how to do that and even if I did and the laptop came on, it means I’d have to find a CPU for it.  My diagnosis is the motherboard has failed and it is better for my client to get a newer, faster laptop than to repair.  I feel they got a good return on their seven year-old laptop.