A recent laptop repair on a Samsung Windows laptop turned into a nightmare.  The owner called me to work on his laptop which was dropped on it’s edge with the AC adapter/charger connected.  The laptop no longer charged from the AC adapter and I offered to see if I could repair it. The laptop was dismantled by removing all the screws underneath and prying the cover off.  The hard drive had to removed to access the power connector area.  Using my VOM (Volt-Ohm-Miliammeter), I discovered the cable had a break in it and no voltage was getting to the motherboard and needed replaced.  I ordered a new cable on-line and once it arrived it was replaced. The laptop worked again and It looked as if I was done, but as the laptop was put back together the real fun began!   To access the power connector the hard drive had been removed earlier and a tiny cable connecting it to the laptop was also in the circuit. I have taken many laptops apart over my career and I have never seen a configuration like this; almost all laptop hard drives connect directly to the motherboard without any connector. This cable was very delicate and in the process of removal, I damaged it. Hours were spent troublshooting  and THAT cable had to be ordered and it took hours to find it on-line. The laptop was finally completely repaired and returned to the owner.  I hope to never see another Samsung laptop like this one that needs hardware repaired again. 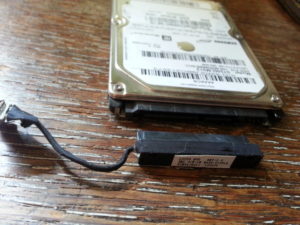