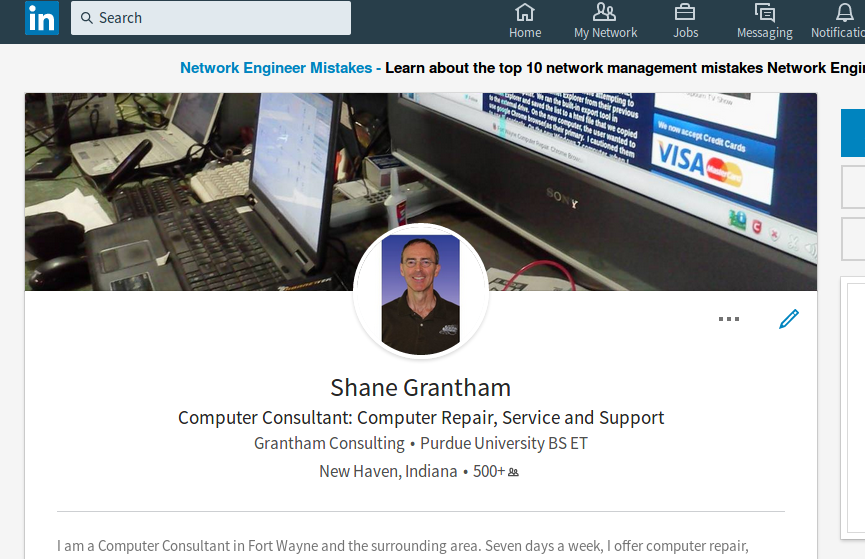 I must be doing something right with Social Media because over the past few weeks I have been asked to speak at two different networking groups on LinkedIn. In the networking group arena when I meet a new business person, I ask them if they are a member of LinkedIn and most networkers are nowadays. Five or so years ago I would get,”What’s LinkedIn?”  If they are on LinkedIN, they usually say “I don’t know what to do with it.”

Some of the things I do on it are promote my business blog, promote my clients, promote my networking group and other networking groups. LinkedIn is also my secondary contact list behind my Google contacts. When a client or networker asks for someone’s phone number, I use LinkedIn to fetch it if I don’t have it in Google.

Lately, I’ve been sharing more pictures on LI and to a lesser extent, videos.  The majority of the pictures are from my smartphone at my computer repair clients and at networking groups. I’ve found that FaceBook is favored by some Social Media smartphone apps for sharing. One of them is Swarm which doesn’t have a LI cross-posting option, but it does have a Facebook and Twitter one.  Instagram has the same bias against LinkedIn.  When I take a smartphone picture and share it to Instagram, an option is available to share to Facebook and Twitter, but not LinkedIn.

How are you using Linkedin?