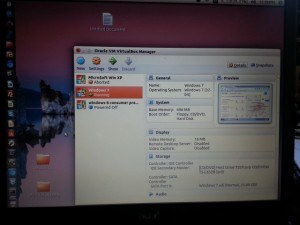 Learning how operating systems operate is fun and helps me in my computer consulting career. One of my laptops I use for training is an old business-class model which came with Microsoft Windows XP pro.  It’s one of the square screens unlike modern ones with a rectangle screen.  It has some nice features I don’t normally see all together in one laptop- Firewire, DVI, VGA, S-Video, USB and Infrared. The screen is a higher-end one with a non-glare finish and doesn’t reflect sunlight or bright lights. I left Windows XP on it and also installed Ubuntu Linux 14.04 in a dual-boot configuration.  Most of the time it’s running Ubuntu which I’m getting accustomed to again.  One of the Applications I have installed is Virtualbox which allows virtual machines to be installed.  A virtual machine is an instance of an operating system running inside the host operating system.  For instance, it allows me to run Microsoft Windows 7 in Virtualbox which is running in Ubuntu Linux.  I can now have the Linux and Microsoft Windows running at the same time. I don’t have to close Linux and restart the laptop to get to Windows. If you haven’t tried Linux, I suggest you do.  It can do almost anything Microsoft Windows can and it’s much safer.