I didn’t know Linux has this! Just like Microsoft Windows. 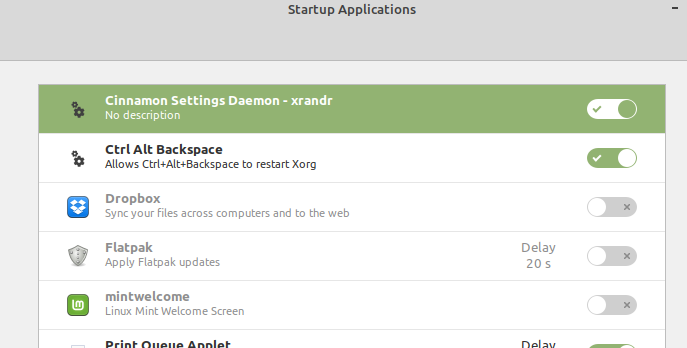 Computers can run slow for a number of reasons. One of them is parts of Applications( or programs) starting automatically when the computer OS starts. I’ve witnessed some Windows computers having 25 items in their startup folders making the computer sluggish. When programs are installed, they sometimes stick part of themselves here so they can be started faster than normal. Most of the time I disable them so computers run faster. I don’t disable security software like anti-virus.

I recently found Linux Mint has a “Startup application” program which can be accessed from the LM circle. it gives you the option to disable each entry or remove it from startup. I use it now on all my Linux computers to speed them up. On every one of my Linux computers, I noticed an entry for Skype and it was removed from startup. It’s not used very often so it doesn’t need to be using resources. A remote control program I use infrequently had burrowed it’s way into my startup on my main office Linux PC and I removed it today. It was used once a month ago and may not be used again.