Linux Mint 18.x is available and my favorite

Linux Mint 18 has been available since earlier this year and I have it installed on one of my laptops.  As some of you know, Linux is my operating system of choice for my computers for many reasons.  One of them is that it can be installed on older, retired Microsoft Windows computers which came from the factory with Windows XP, Vista or later versions.  The laptop I have it installed on originally came with Microsoft Windows XP and was manufactured around  2007.  Not bad for a nine year-old business laptop!

The previous version of Linux Mint is 17.3 and still is supported until April 2019.  It’s installed on my main desktop computer and works welI for the computer’s age – it is so old it has a 3.5 inch floppy-drive in it.  Be aware that you can’t easily update from 17.3 to 18.x because it is a major update between releases.  You can easily update between the same version releases as in 17.1 to 17.2 to 17.3.  It would be a reinstall to go from 17.x to 18.x.  I’m keeping Linux Mint 17.3 on my desktop computer as long as I can.

I have not noticed much difference between 17.x and 18.x, but there are improvements and new features – I just have noticed them yet.  I have more computers than the average user so I spend computer time spread over many different operating systems and don’t focus on just one.  Linux Mint 18 will be supported until April 2021 and it’s the perfect operating system for you instead of Microsoft Windows which is having updating issues as of late.  Linux is also safer and more secure than Microsoft Windows and doesn’t seem to crash.  And of course it’s costs much less. 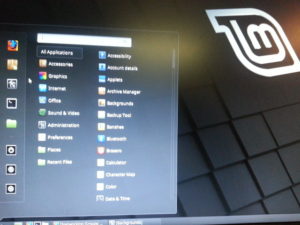