A couple of months ago I had a Fort Wayne computer repair service call on a loud Linux computer. One of the complaints was how load the computer had become.  I examined the outside of the computer case in the rear and saw the power supply and case fans were turning at a normal speed.  I thought one of the motherboard fans could be failing with a bad bearing or other hardware.  The case cover was removed and the CPU fan was turning at a normal speed. I could tell the loud noise was coming from the CPU fan. Once the computer was powered down, I looked closer at the fan and could see a lot of debris on the heatsink below the fan.  Once I blew out the debris, the computer was much quieter – to my amazement.  It got so caked up with dirt and grime that it interfered with the fan turning. 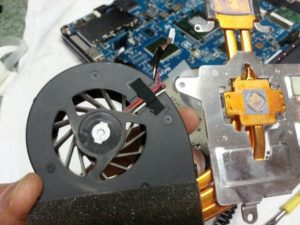