Maybe I shouldn’t have used the temporary folder in Linux

I took some Information Technology classes at Ivy Tech Fort Wayne around 2001 while working at a local IT company. The professor from my Linux and Unix class told us that the operating system uses the \tmp folder for temporary storage. It cleans out the contents of \tmp as a normal housekeeping task when Unix and Linux shuts down. Consequently, don’t put anything important in it that you want saved permanently. As I used Linux and Unix, I always left it alone and never stored things in it.

Last winter, I was working on one of my own Linux computers with some pictures and videos from one of my smartphones. The intention was to move them to a file server for long-term storage. I moved them off the smartphones and into the computer’s \tmp folder.  Something interrupted me and I forgot they were there.  The computer got powered down before I could move them out of  the \tmp folder and I forgot about them. A few days later, I went back to find them hoping what I had learned in class for Unix didn’t happen to my Linux files. To my dismay, they were gone with no chance of recovery.  A valuable lesson was learned: Be cautious storing files in the \tmp folder. 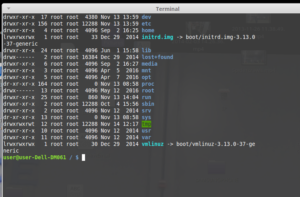