Where are the locals at networking groups? 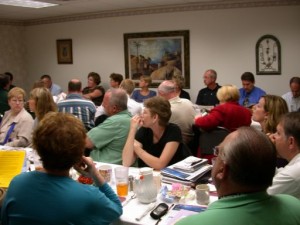 I’ve been networking in open groups practically every week since August of 2005. These groups have helped my business and personal life more than you can imagine. My first group was the New Haven Chamber of Commerce where we met at the Marine Corps League on Lincoln Highway. Shortly after it started, the meeting moved to Millies/New Haven Tanning building in their conference room in the back. We used to pack 30-40 people in that room and below is a picture I took at Millie’s in 2006.  The one issue I have tried to grasp over my networking career is why people and businesses located closest to the meeting rarely attend the meeting. This applies to all the groups I attend. People farther away were more consistent attendees.  One example of this was I had two business clients who shared the parking lot with Millies/New Haven Tanning. I invited them both to our New Haven Chamber networking meeting many times, but they never attended. All they had to do was walk across the parking lot. Yet we would have people come from Fort Wayne, Ohio, Angola, Leo, Decatur, and Auburn to attend.  At the old New Haven Chamber meeting we did have some New Haven businesses attend often, but there should have been many more. On another note, Vic Sockrider and myself are running a “new” New Haven Chamber networking group at Rack and Helens every Thursday at 12 noon. It’s open to all and I want to get more New Haven businesses and people attending. Help me spread the word about the group with your contacts and lets pack the room!  What has your experience been with networking groups?