Many of you know one of my business passions is networking in open groups and I have the fortune of running a local group along with Vic Sockrider every Tuesday.  The New Haven Chamber wanted to start one and Vic and I volunteered to run it.  Vic used to run a group at his old business around 2009-2012. Our new group has brought me back in touch with some of the New Haven businesses and people I used to see. And now I’m realizing how much the New Haven Chamber does to help businesses in Allen County.  Our group meets every Tuesday noon to 1PM at Rack and Helens Bar and Grill on Broadway in New Haven, IN and everyone is welcome.  Our last meeting was probably the best so far for me because of the mix of attendees. David Jackson who I know from Norris Networking attended for the first time and heard about the meeting from Carol Remley.  Ron Oetting was there also for the first time and he was at the previous New Haven Chamber of commerce networking group in 2005(my first group). Tony Tribolet was there and becoming a regular. Another regular, Amanda Blackburn from State Farm was there.  Robin Gillingham was there for her first meeting, but attends many other groups and that’s how I know her.  Doug from T&D returned and Lisa Holler from across the street attended her first meeting.  Another first timer was Hannah from Trine University who heard about us from Monika from the chamber who also was there.  Leanne White returned this week to make this her second meeting and we had a nice conversation after the main meeting- probably the longest we have talked.   We have no idea how many people will be at next Tuesday’s meeting or who they will be and that’s one reason I like open groups.  We’re keeping the formal meeting to one hour or less and this should bring in more people and more returning people.  Come join us at Rack and Helen’s every Tuesday noon and share your business with us upstairs in the conference room. 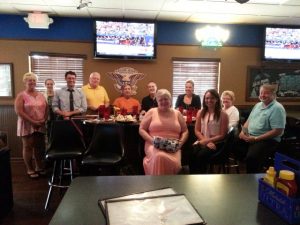