I was at a business client this summer where a hard drive had failed on a Windows workgroup computer in a shared peer-peer network.  After we got the new hard drive installed and setup, I had to change BIOS settings for drive to be seen by the computer. I went to share the folder for the other workstations and major problems occurred with mapping the drive from the other computers in the office.  After much investigation, Vipre security on the computer with the new hard drive was the reason.  It was blocking access from the other computers. I can’t remember, but I probably attempted to configure it to allow the local workgroup to use the local drive. My client didn’t like Vipre Security so I removed it and installed Comodo Internet Security in its place. Once the local network was set to “Work”, the peer-peer network worked as it should.  All computers could see each other and access files and folders.  This goes to show that a computer security product can disrupt a network just like a hardware problem.  This isn’t the first time I have had a security product disturb a local network or computer. 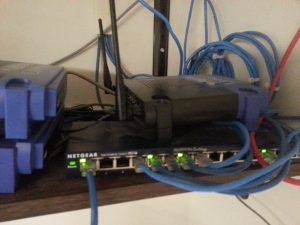