Another use for my old LG smart-phone 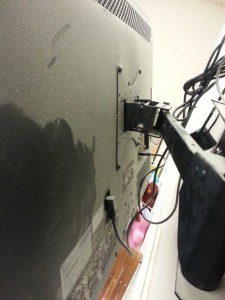 One of my Fort Wayne computer repair business clients has a fairly large TV monitor in their lobby with anattached media player device which is used to show a slide show about the company, employees, and clients.  A few months ago, it stopped working and I was contacted to troubleshoot.  We tried connecting to the media player through a Windows 7 computer which manages and streams the photos to it.  The computer can’t “see” the media device on the network any longer as it could in the past.  Several things were tried and I gave and later.  Technical support for the media player was contacted and they felt the media player was defective and needed replaced. It was no longer supported as well so I wanted to be sure it was the problem.  I wanted to test the TV monitor to ensure it was not the problem.  The media device is connected via the HDMI port and I was trying to think how I could get another device connected to TV’s HDMI port 7 feet off the ground where it was mounted on the wall.  Then i remembered my old LG smartphone has a mini-HDMI port on it which I think isn’t common on smartphones.  I came back later with my old phone and a mini HDMI to HDMI cable.  I connected the smartphone to the TV and sure enough, the TV mirrored my smart-phone display so The TV is good. It’s nice having old smartphones as support tools.