Can you help me get Netflix on my Smart TV?

While I was on a Fort Wayne computer repair service call this month, a client asked me if I could help them get Netflix on their large-screen TV.  After I had most of the computer work completed and some scans running, I tackled the television issue by asking questions on the history of the issue.  I found out Netflix never did work on the TV, but it did work on their previous one.  I started looked at the back of the TV for an ethernet connection and found an empty port and asked more questions.  I found out their TV used to be against a different wall in their basement and had many connections and ports in the wall. My client had a drywaller cover all of them up and now I couldn’t see them, but one had to be an ethernet port running o the room with the internet router.  Their problem was no intenet connection was active on the TV.  I don’t know if large-screen TVs have built-in WiFi currently, but this one did not.  I toggled through all the setup and conngiration menus and only found wired networking.  I ran my longest ethernet cable from their internet DSL router to th back of the TV down two flights of stairs and had just enough length. I tried all sorts of things and never did get the internet to work on the TV because they said to stop.  Maybe their TV is too new to work with the DSL router. The odd thing was the DSL router saw the TV and leased it an address, but it was a different subnet than the desktop computer and my laptop. I wish I knew what the problem was.  Has this ever happened to you? 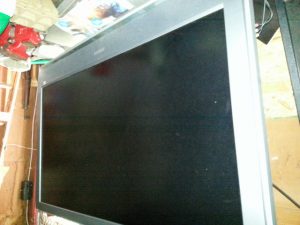